Born in 1844, Cassius Marcellus Coolidge is very prominent for his art; Dogs Playing Poker. Even though he had no background in formal art guidance and training, the artist, at present is known as the greatest in pop culture. His art is a unique masterpiece which has not one but a series of similar painting. He was only 20 years of age when he decided to paint pictures and illustrations in a very surreal and humorous way. It is still not evident from where he got the idea for this series of paintings. Rumors are spreading that he got inspired by the works of Michelangelo Merisi da Caravaggio, Georges de La Tour, and Paul Cézanne. Whatever the case is, the artist’s name has been very relevant once he published this particular piece of work. Speaking of the painting, in this article, we will see some of the cases while considering Dogs Playing Poker.

Dogs Playing Poker is not one painting, but a series.

As mentioned in the introduction part, the painting is not a particular painting, instead of a series of paintings. Earlier, the artist’s dog painting was exclusively for the cigar boxes. It was only in late 1903; the artists started placing his magical hands and started working for Brown & Bigelow. It was only since then the artist began working to be known as one of the greatest painters of all time. He started working on A Bold Bluff, Poker Sympathy, and Pinched With Four Aces. All these works are still remembered till now and for the years to come.

The most popular of these paintings are of dogs cheating at poker.

In a masterpiece known as A Friend in Need are a couple of dogs playing Poker at a round table. In the painting, we can see a pair of bulldogs playing against the five hounds. It is depicted as a friend who helps the other friend in need, just like the name suggests. It is also the painting that is usually depicted as the Dogs Playing Poker.

One of the most significant things to note here is that these paintings were used for commercial use. Not only that, but these kinds of art are referred to as the Kitsch. Kitsch simply means the one that is bad to the bone.

These paintings gave Coolidge some fame in his 60s.

Yes, these paintings gave the artist some fame and reputations in his 60s. One of the facts about the artist, Coolidge is that he is known as the father of Comic Foregrounds. For those who don’t know, it is the main attraction piece of carnival where the tourists and visitors can stick their heads on a cartoon or any kind of figure. It is estimated that the artist earned around $2000 to $10,000 for the paintings. 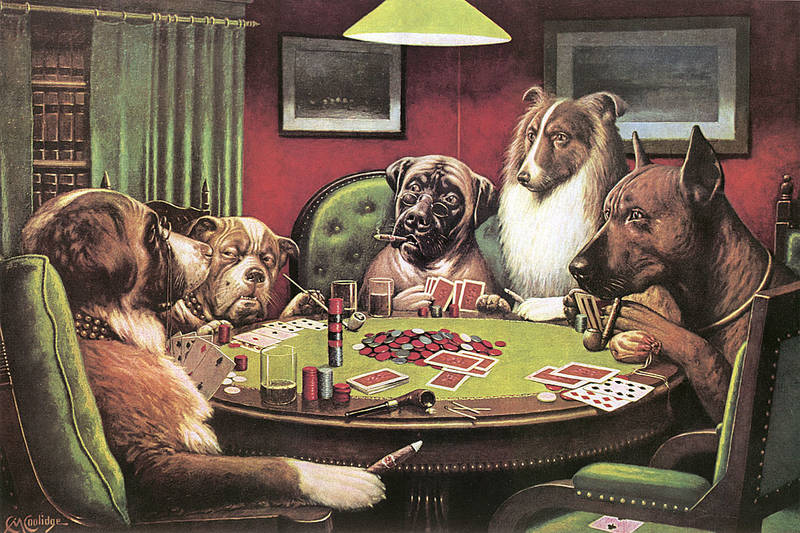 In the year 1998, an auction took place at Sotheby, where the artist’s masterpiece was sold for $74,000. There were even predictions and estimation spread around the city that the artist could easily make $30,000 to $50,000. But, forgetting and hitting all those silver linings, an anonymous bidder bet all the paintings for $590, 400.